We had our annual sis reunion the first full week of May. All of my sisters and mom were able to travel to Kiley's house in Nebraska for a week (that includes travel days) to play together. We did miss Jen and Sara but look forward to seeing them next year. I think it's kind of funny that we flew to Salt Lake last year for the Sis Reunion and that we drove to Nebraska. (Tickets are a lot cheaper to fly to SL than to any airport close to NE-are there airports in NE!??!)
On our way down to Nebraska, we stopped at my Grandpa Nielson's grave and saw his new headstone. They did a really good job on it. It had been raining and that's why the headstone looks like it does, with the sunbeams highlighted. 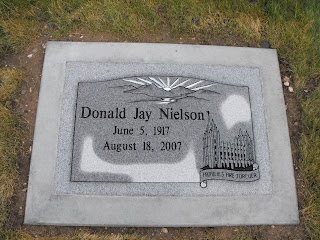 We also got to go to Chimney Rock. I was just amazed at this landmark and impressed by the sacredness of the area. Our pioneers past through there. Not just of our Mormon heritage but also many (if not all) settlers coming to the west. Chimney Rock also symbolized the hard trek that was before the pioneers, that of crossing the Rocky Mountains. The museum was very interesting. Bode wanted his pic taken by the bow and arrow. The feathers off the side of the picture are an Indian Headdress!! 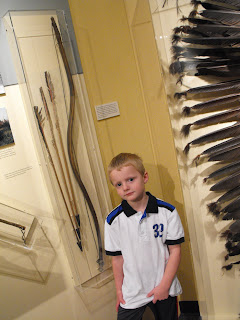 We did spend alot of time "out on the range". We got to herd a sick calf with the suburban. It was fun to watch Jason and "the man from snowy river" ride their horses (galloping while NOT HANGING ON!!) to catch calves that needed to be doctored. They would catch the calves and then drag them to the doctoring PU. I also had the thought that this state should be "The BIG SKY STATE". There are no mountains to jet up into the sky at all. It looks like the sky goes on forever. You can see from the pics that there is ALOT of sky. Brek is being very stoic in this pic. BETTER NOT SMILE!! 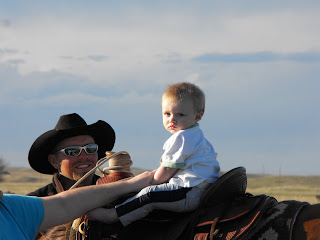 There were LOTS of cowboys at the branding. Almost all were wearing cowboy hats, boots, chaps or chinks, spurs, the whole set up. They had all the fronts of their legs protected but almost every one of them had a dirty bum from sitting in manure. Mijken said she saw one cowboy with CTR on his spurs. Of course, they used a real branding pot with real brands or at least not electric brands. They had a fire in the pot, not on the ground (I guess they have come a little bit farther in doing things because they had their irons in a pot and the fire was fueled by propane not wood.) Brek stood there a sized up this cowboy for about 5 minutes. When the cowboy finally looked at him, Brek started crying. I guess Brek wasn't as tough as he thought he was. 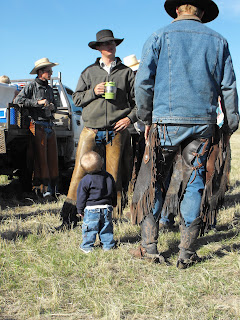 This last pic is for Erica and Ki. We saw this statue on our way east. Way off in the distance, we saw it coming up and Mijken and I were talking excitedly about it. "Oh look, a cool looking rock, oh ahh!!" As we got closer I said, "It looks like Ab Lincoln, don't you think?" Getting closer still, DUH!! It's a monument dedicated to Lincoln. We thought we had found some amazing rock formation that nobody had discovered before. Yeh, not really, it's man made, put there on purpose! Erica and Ki, who have seen it several times thought it was hilarious! 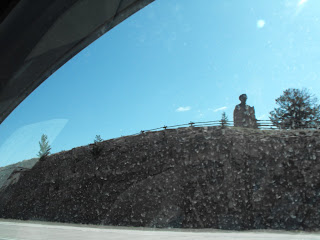 Posted by Summer Freeman at 9:41 AM

Fun Fun Picts! I am jelous, I want to go on a road trip too.

It sounds like you had a lot of fun on your trip. It's nice when you are able to do that every so often. 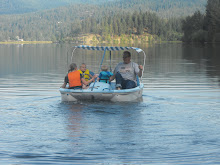